I belong to a men’s group here in Orange County and what’s unique about our group is we range in age from 35 years old to 75 years old.  We talk a lot about business, but believe it or not we talk more about our spiritual beliefs and our opinion on things.

Last week, one of the gentlemen in his mid 70’s, a very successful multi-millionaire, began to talk about how kids these days just don’t have the work ethic that he did when he was a kid.  You know, he may be right and there’s some truth to that. He went on to say that something that he did with his kids that I thought was amazing was he told his children, it doesn’t matter if you’re a doctor or a lawyer, whatever you decide to be when you grow up, just be the best that you can be and put the work in and I’ll be proud of you.

His son went to film school like so many kids out here in Orange County and Los Angeles do, they want to be a film director and work in the film industry.  He graduated and he got an offer, not a job offer, but he actually got an opportunity to go on an interview with a large film studio in Los Angeles. He did extremely well in the interview, but they didn’t hire him so he ended up selling men’s suits.

Then about two months later, they called him back and interviewed him again. This time they offered him a job.  So immediately he called his Dad and said, “dad you are not going to believe it, I got hired as a Page!” His dad said, “son, I’m so proud of you, congratulations what’s a Page?”  His son said, “well, it’s kind of like I go here, I get coffee, I run errands. He’s basically a gofer. His Dad said, “son I’m so proud of you, be the best Page you can be, standout, be the best and people are going to notice you and things will happen for you. His son said, “Dad, I will.”

Months went by and his son was just grinding and putting in the work and doing everything he could to stand out. The President of the film studio saw this or heard about him and they offered him a job in the department that he really wanted. So basically, his dream job.  He started at one of the lowest jobs possible and now he’s working his dream job. And that’s amazing when you think about it. So, what was the difference? Was he the smartest person? Maybe, or was he the hardest working person?

If you are in sales, because salespeople are mostly the people that listen to my videos along with some business owners and CEOs.  You have an opportunity each and every day to put in the work to go the extra mile. What I find out is that sales people that actually put in the extra effort and work a little bit smarter are the ones that tend to make the most income and have the highest conversion rates.

So, you may say Tod this sounds good, but it’s not really a sexy thing you’re telling me.  Hey look, I’m trying to give you advice that’s going to help you make more money, increase your sales and actually have a better life…now that is sexy in my opinion. If you have a great work ethic in every thing you do every thing will be better.  This is something I’m always thinking about and can get better at. If we all put in the extra 10-15–20%, I think we’ll get that back in return on increased sales. 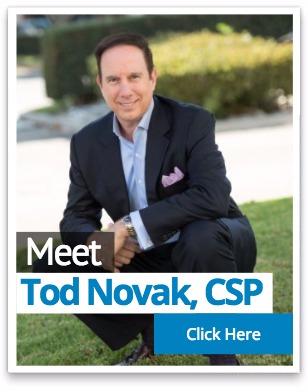 Get Social with The Novak Group!